Recently, on May 18, 2013, the months of hard work, determination and preparation paid off for members of the Dream Riders Equestrian Team. The following individuals participated in the 2013 Special Olympics at Troy State University in Troy, Al: Sara Bracken, Wendy Terry, Daniel Jackson, Mamie Lewis and Sadiyyah Duffy. Dream Riders: Sara Bracken, Wendy Terry and Daniel Jackson all from Decatur, Al, participated in the Equestrian Competition and brought home medals and ribbons in both the Equitation and Working Trails Competitions. Wendy Terry brought home fourth place ribbons in the competition and was the only rider who rode unassisted in both categories. Sara Bracken brought home a Silver Medal in Equitation and a Bronze Medal in Working Trails. Daniel Jackson brought home the Gold in Working Trails and the Bronze in Equitation. Sadiyyah Duffy and Mamie Lewis from Huntsville, Al, both participated in the Bocce competition. Sadiyyah Duffy brought home a fourth place ribbon and Mamie Lewis received a Gold Medal. Congratulations to all athletes. Thanks to all the supporters and coaches who assisted in making this event so rewarding for all participants. 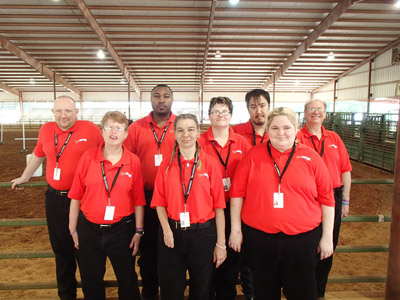